“Nevaeh” Gear development in present version is divided into 4 parts:

The gear in Nevaeh can be upgraded by swallowing other gear. The higher the level and

quality of swallowed gear, the more EXP it gains. 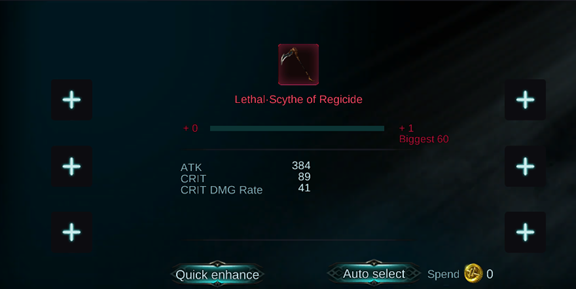 If enhanced gear is used as upgrade material, its EXP will also be transferred to the new gear completely. Basic attribute value of gear will be increased according to certain percentage when upgrading the gear level.The higher the level of gear, the more EXP it needs for upgrade, but the bigger the profits too.

Gem: Each gear can have maximum 4 mounting hole. The gear you get might already have 1-4 holes. Unopened hole can be opened by consuming diamond.

Obsidian on weapon, Emerald Stone and Amber Stone on cuish, Light Obsidian and Violet Stone on necklace and Dragon Eye and Dark Obsidian on ring.

After mounting,attributes of gem will be added into player's attributes.Mounted gem can be taken down from the gear anytime. Player is allowed to refine gear from Lv. 30.

Orange and red gear of Lv. 20 and above can be refined with Angel Heart and upgraded to divine gear. When all gears on body have been turned into divine gears, you can activate divine suit attribute.