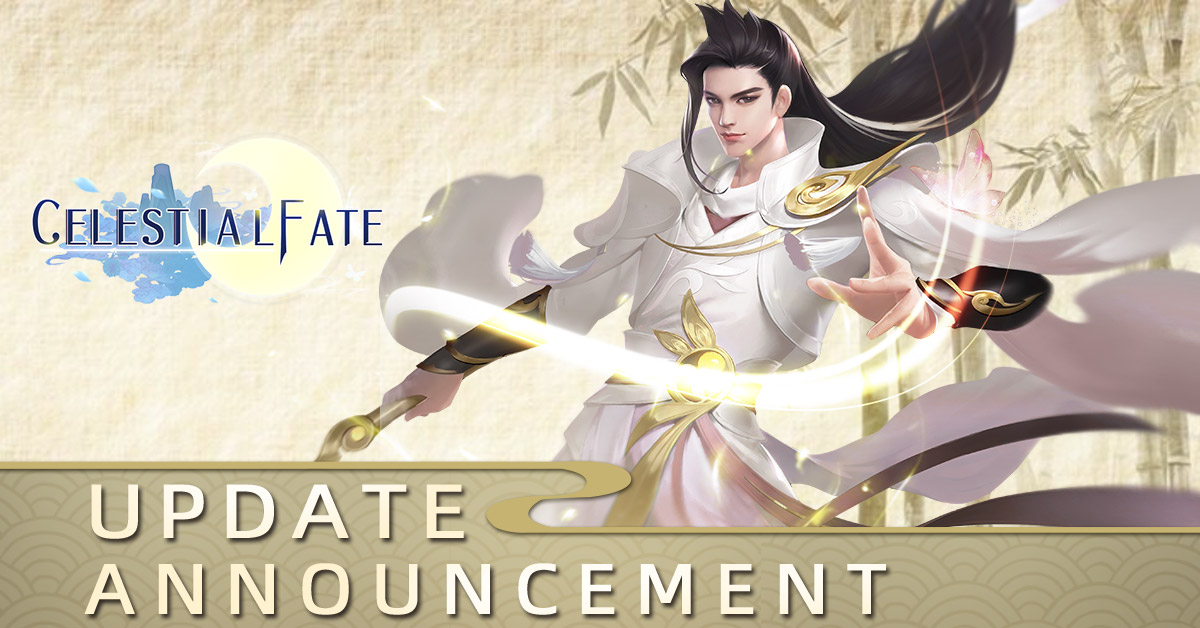 Your support for Celestial Fate is much appreciated. To bring more fun and interesting gameplays to you, we are going to conduct a version update and system optimization. You will be unable to log in to the game during that period, so please log out in advance to avoid any unnecessary loss. The schedule is subject to change depending on the actual progress as well as the server opening time.

We sincerely apologize for any inconvenience caused and appreciate your understanding and support!

*Remind: Please log out the game 5 minutes before the maintenance to prevent any problem from happening. We will make an announcement once the maintenance is completed. Sorry for any inconvenience caused in advance and thank you for your cooperation.

② Equipping of relic increases stats and mana of characters

③ Five Phase Mana: Based on the restraint relationship of 5 phases, the side with higher mana can deal extra fixed damage when in battle

④ Relic can be enhanced. The level of enhancement will remain on the corresponding part, gear on that part will obtain enhancement buff after equipping

2. Gameplay Introduction: Players can enter Ancient Ruins with Five Phase Ticket and kill monsters to get item rewards. Killing will decrease mana that will decrease with time too. Killing of mob will not decrease mana. When mana reaches 0, players will be sent out from the scene (damage will be dealt only when the Five Phase gear of player restrain the stats of monster). Killing Silver or Gold Sword Spirit will increase the chance to get Five Phase Gear. The Sword Spirit will appear regularly in the scene.

① Stats slot can be activated with Sycee. After that you can purify Rebirth Gear with Purify Gem to increase stats buff of the gear. The stats will change every time you purify the gear and you can choose to continue purifying or replace it. Stats slot can be locked so it won’t be changed after purification.

② Purify Gem can be obtained from Purify Dungeon. You have free chance to purify your gear daily (no material required)

③ Special Purification: When requirements are met, you can consume Sycee to generate one stats of purple and above. You can use Orange/Red Purify Crystal to generate Orange/Red stats

① This dungeon unlocks at Lv. 92. Its rewards include Purify Gem and other purification related items. This dungeon is divided into 7 levels of difficulty. The higher the level of dungeon, the richer the rewards. 1st Clearance Rewards will be received when you clear the dungeon for the first time. The shorter the time you use, the higher the rating you get and so richer rewards you will get

② There are 2 challenge chances every day. The chance will be deducted only when you clear the stage successfully and can be reset by consuming Sycee (up to 2 times a day). Purchased chances are valid on that day only

④ You can purge all stage (required to activate Princess Iron Fan first) to get the rewards of the most difficult stage you have cleared.

2. Gameplay Introduction: Players can now publish their information in My Space

【New Gameplay - Status posting and Follower of My Space】

1. Gameplay Introduction: Players can post their status in text on My space. The number of post is limited. Players can also follow other people and become their fans.

1. Game Introduction: You can view the status of other players and content of certain groups or topics in this Square. When a character is popular enough, they will be listed in a popular ranking and become the center of attention!

2. Gameplay Introduction: Guilds of Lv. 5 and above are eligible to take part in this. This war will be a battle among five adjacent servers. Guild leaders have to choose and attack a city by consuming warzone resource. Both the attackers and defenders have to seize 3 War Flags. The winner will become the conqueror and receive abundant rewards

2. Gameplay Introduction: Couple players can sign up for this before this event begins (entry is limited). This is a 2V2 match. All players of the server of champion couple will receive the rewards while the champion will be given extra rewards (sent via mail)

3. Requirement
- At least one of the couple must be one of the top 1024 players on C.S. CP Ranking (Ranked Match CP Ranking)

-  One of the couple must send 100 flowers to their couple on the day of registration
- Both parties must be online when registering for this event. One of them taps to register while the other one will be notified
- Entry of this event is limited. Only 512 pairs of players have the chance to take part in this

【Server Optimization】
1. Optimize the streaming experience of an excessive amount of players during cross-server gameplay
2. Increase the max limit of players in a server
3. Manage the server merge accord to the activeness of every server
4. Optimize the issue of over-heat of a certain model of phones.

We reserve the right to amend any of the rules and regulations without prior notice and should any dispute arise, Celestial Fate's Official Team decision is deemed final.

#MothesdayHello players, Today is Mother's Day, I hope you don'

Hi, today’s a day worth celebrating, as it’s Friday and tomorrow is we

Dear player, To maintain the stability of server and improve the quali